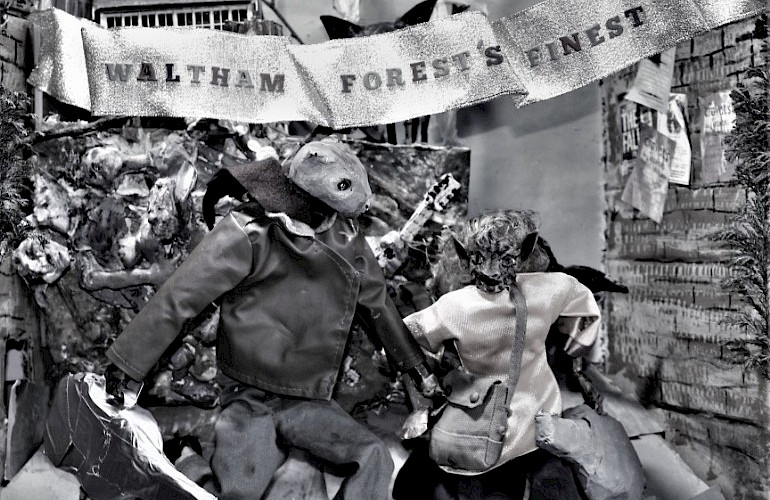 I was asked to design the front cover for Magnolia Productions forthcoming compilation cd Waltham Forest's Finest, which features recordings by some perhaps less well-known bands and musicians based in the north east london borough over the years, many of whom played the local venues at one time or another. A couple of bands I was in some years ago appear on the cd (The Bare Bones from the 1990s, and Siskin Brace more recently).

I wanted to make something 3-dimensional which could be photographed for the cover design. I came up with the idea of using animals (with human bodies). I didn't want to allude to any actual band or artist, or any particular place in the borough; the animal-head musicians would obviously be imaginary and the setting generic.

I already had a stag puppet, about 12 " tall, which I was using in a home-produced film I was working on. I thought I would use him because a stag's head features in the coat of arms of Waltham Forest. I made a second puppet, a cat-like creature, and then made a model set for them to inhabit. When I tried taking a photo of them, however, the stag's head seemed too small and was somehow hard to see against the background. I decided to make a new head for the puppet, and this time I made him a grey squirrel. Grey squirrels are common in Epping Forest, which is the place that gives the borough the "Forest" part of its name.

I then asked my daughter Jo Bloor, a visual artist, to take some photographs of the set-up, which shows Squirrel-head and Cat-head running through the streets of town, both clutching guitars, as if late for a gig or a band rehearsal. In the background you can see a scale model of the old Higham's Park signal box (made by my dad for his railway lay-out) and some rabbit-eared musicians in a sort of scrum, and various other bits and pieces. Jo then worked on the photographs, editing the composition and the colour. She tried a black and white version, which we both agreed looked the best.

The cd will be for sale at a launch event with live acoustic performances on Sunday June 16th 2019, from 2.30 to 6.30 at Walthamstow Cricket Club, 48A Greenway Ave. Walthamstow, E17 3QN. The launch is free. The cd is a fiver. I will be there, playing a couple of songs.

Songs; writing them, recording them, performing them...

Pictures at an Exhibition

On The Romance of Flowers